Realignment rumors continue to swirl, almost all of them pointing to the demise of the Big 12. While Texas A&M awaits its release from the Brazos Valley Jail being run by Baylor, Oklahoma continues to make plans to ask to join the Pac 12.

Other reports had University of Texas President William Powers Jr., athletic director DeLoss Dodds and women's athletic director Chris Plonsky flying to Norman to try and convince the Sooners that the Big 12 could be saved -- apparently to no avail.

According to sources at the Austin American Statesman, Texas now has three viable realignment options - independence, the Pac 12 or the ACC.

Other sources in Oklahoma say that there is no final decision on applying to the Pac 12 for the Sooners. Former OU coach Barry Switzer has a piece of advice for those making the decisions, Whatever you do, don't go anywhere without Texas. 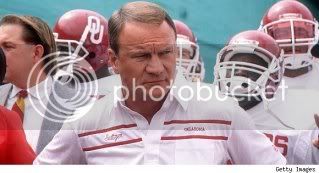 "I don't know where they're going," Switzer said Monday. "But I think (OU & OSU) would be making a hell of a mistake to not go where Texas goes."

Switzer noted that Oklahoma could not win without talent from the over 1,700 High Schools in Texas, and that recruiting would be much tougher in the Lone Star State for the Sooners if they didn't have a presence here during the season.

Switzer added, we need to be kicking their (behind) in the same league instead of not competing against them in a different league."

More from Crimson And Cream Machine on an OU Pac 12 application here.