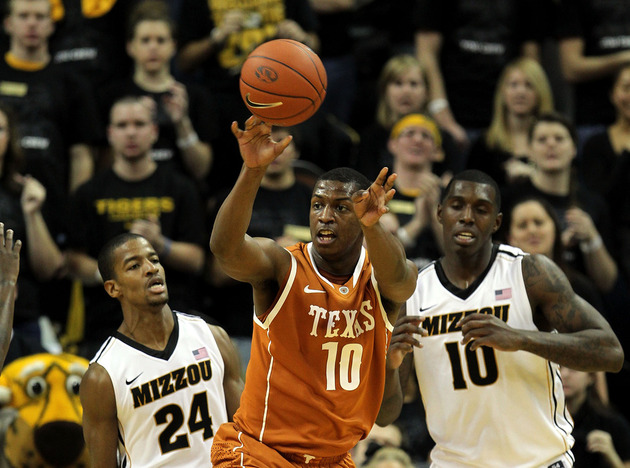 Quoting Denny Green, the Texas Longhorns basketball team "are who we thought they were." J'Covan is a hoss, inexperience is a huge deal on the road, and size matters. Missouri shot lights out in the first half and Texas went into the locker room down 15, but a huge second half by Brown kept the Horns hanging around. At no point did Texas look like a serious threat to win, but there were encouraging signs of life from the young'uns. An 84-73 loss to a top 3 Big 12 team sucks, but it's acceptable.

J'Covan Brown "at 70%" - Brown's final stat line: 34 points, 4 rebounds, 2 assists, 6-7 from long distance, 10-16 overall. He's become a complete basketball player, and I like him better than previous Big 12 studly 2 guards Jacob Pullen and LaceDarius Dunn. Brown is a pure scorer, but he shows an understanding of team basketball slightly beyond Pullen's grasp (and far and away beyond Dunn's). That said, Pullen put last year's fragmented K-State team on his back and willed them to an NCAA Tournament bid. We'll see if Brown has that in him. After the game, Brown told AAS reporter Mark Rosner that he played at 70%, and Rick Barnes took affront. Okay, then.

Myck Kabongo's Dribble Penetration - With undersized Phil Pressey guarding him and no shotblocking threat Missouri's defensive interior, Kabongo was pretty much able to penetrate at will and create scoring opportunities for himself and his teammates. His 4 turnovers were too many, but I'll take 10 assists from my lead guard any day of the week. He hit both of his 3's with a confident, strong stroke. 12/10 is a big plus after his dismal showing against Texas A&M.

Missouri's Senior Leadership - Earlier this season, I talked at length about my perceived paradigm shift in Rick Barnes' recruiting philosophy, and if you were watching Missouri, you'd understand why. The Tigers trotted out a starting lineup with 4 seniors, 3 of whom are potential First Team All-Big 12 candidates. Looking closely, I saw a little glimmer of hope that one day Julien Lewis could become Marcus Denmon, Sheldon McClellan Kim English, and Jaylen Bond Ricardo Ratliffe.

Interior Assertiveness - One of Missouri's exploitable areas going into the game was their lack of interior presence. It's a shame Laurence Bowers tore an ACL prior to the year, because this Tiger team with Bowers likely would have been considered strong favorites to reach the Final 4. Even without Bowers, they're good but not intimidating. The Tiger bigs, Ratliffe and Steve Moore, combined for just 5 rebounds in 42 minutes, and Texas outrebounded Mizzou 29 to 24. But Clint Chapman, who was decent in limited minutes, picked up 2 quick fouls in the first half and never got established. Holmes had a quiet 10/7; he's not an interior threat at this stage, anyway. Bond was a non-factor, and Alexis Wangmene showed his usual size and catch limitations.

Stopping Phil Pressey - Sometimes you tip your cap and shrug your shoulders. If Pressey is draining 3 pointers (shooting 28.6% of the year, but hit 3 of 7), there's nothing much to say. But Kabongo and company repeatedly allowed the lightning quick Pressey to both drive into the paint and create transition buckets, a backbreaker when playing against such a gifted offense. Pressey matched Kabongo's 10 assists but left the turnover column spotless. On the plus side, Pressey's maturation from lost freshman to playmaking sophomore should hearten Texas fans--provided Kabongo sticks around for year 2.

Opening in a Zone - I understand the arguments for trying to zone Missouri. Don't chase around their scorers (English and Denmon) and give Pressey a cushion to guard against penetration. But Texas doesn't particularly zone well, and giving Marcus Denmon even an inch to shoot is generally a recipe for disaster. With Lewis and McClellan coming off an above average job limiting Texas A&M's Khris Middleton, why not give them a chance to man D? By the U-8 timeout, Mizzou had hit 7 of 8 from long distance and opened up the double-digit cushion it needed for a victory. To wit, PB's post-mortem at BON has a sobering fact below. Texas is a good man-to-man defending team. Play to your strengths.

In these five minutes of game action, Mizzou outscored Texas by a 23-2 margin. The rest of the game, Texas prevailed, 71-61.

McClellan and Lewis Show Their Freshmen Stripes - The two freshmen were nails at home against Texas A&M, but combined for 8 points on 3-18 shooting and 5 turnovers to boot. Someone in my Twitter timeline noted an interesting stat that Lewis has attempted 151 field goals, second on the team. That's particularly noteworthy, as he's hitting only 34.4% on those shots. That's also particularly, umm, not good. Meanwhile, more than a third of McClellan's shots have been 3's (56 out of 140 attemtps), yet he's hitting just 30.4% from 3 as opposed to 53.6% from 2. As freshmen, these guys will have their ups and downs, but Barnes needs to at least teach them how to play efficiently rather than bury the offense.

In my previously linked Murderer's Row preview, a couple of comments noted that I was perhaps overlooking Kansas by calling them the Horns' most likely win. Not true--I was just pointing out the stark difference between trying to win at home versus on the road. Just ask Texas' next opponent, Kansas State. At home, the Wildcats spanked Missouri and lost to Baylor by just 2. On the road, the lost to Kansas by 18 and Oklahoma by 9. While the Wildcats aren't nearly as talented as Missouri or Kansas, they're going to be a load to handle in Manhattan. Stealing a win at K-State will require the Horns to do things they didn't do against Missouri--avoid foul trouble, shoot the ball well, limit turnovers.

Oh, they'll have to do those things against Kansas too. It's just that the home environment should be much more conducive to coaxing a victory. It's why I think Texas' home game against Missouri will be much different. While it's possible that J'Covan Brown will go off for 30+, it's not likely. However, Clint Chapman should get more playing time inside, the freshmen guards will shoot better than 16%, Phil Pressey won't likely be that magician-like offensively again, and Missouri won't hit 7 of its first 8 3's...I hope. Of course, the next time the Horns play the Tigers, Texas could be 2-5 in conference play and fighting for its tournament life. So, one game at a time, gents.