Anatomy of a Meltdown - The Final Texas @ Texas A&M

Share All sharing options for: Anatomy of a Meltdown - The Final Texas @ Texas A&M

On November 25, 2011, two improbable things happened in College Station, Texas. The first was the Texas Longhorns upsetting a better football team, and the second was that the better football team was, in a rare twist, Texas A&M. Cats mating with dogs, and all that.

If the game were played on paper, A&M wins by double digits, perhaps by three touchdowns or more. Texas' offense spent most of the night barely meeting the requirements to be considered an offense at all -- between the talented players who were hurt, and the not-as-talented players who were healthy, it's worth considering that A&M probably would've won had they just gone the route of coach Red Beaulieu and knelt every down in the second half.

I read and enjoyed Drew Kelson's take and there were enough things in this game that were of interest I thought I'd write another piece. Texas finished under 4 yards per play for the game, had two turnovers, ten penalties, and punted 19 times in the first half (I couldn't find the real number, but that feels right). There were times when even getting a snap off proved to be a challenge. Yet Texas still won.

It was one of the ugliest games I've ever seen and, at the same time, one of the most remarkable. Not every team would have been able to pull it off. Here is how the Texas defense (and special teams) earned one of the most important wins in rivalry history.

First things first, I will go to the grave believing that A&M wins if Cyrus Gray is healthy. A&M runs a very similar system to the Houston Texans, a zone based blocking scheme designed around clinical expertise and a running back with vision and balance to find a crease and keep the arm tackles from bringing him down. The system has a long history of making stars out of lesser-known talents by limiting the skill set needed. As long as you're patient, disciplined, and aggressive, you'll succeed.

His injury caused a ripple effect in the game -- A&M couldn't produce on the ground as the game wore on and put more and more responsibility on the usually productive Ryan Tannehill. Ben Malena made a few good plays, but couldn't escape Longhorn tacklers and extend drives with yards after contact.

The Aggie OL also struggled in the second half. They are a well-trained unit but couldn't match the athleticism and length of the Longhorn defensive front. They were constantly out-angled and overrun, meaning the Ags couldn't grind the game away on the ground.

2. Carrington Byndom beat up on a gimpy Jeff Fuller

Another key injury left A&M exposed in the passing game at the worst possible time. Byndom, who might be the best cover corner in the country now that Morris Claiborne in is the NFL, spent more of the night matched up with Fuller on the outside.

In the west coast scheme, the slot receiver (Ryan Swope, usually) or tight end (stiff) is assigned to find space in the middle of the field, based on what the near safety does. The safety has to choose between helping in the seam and leaving the middle of the field open, or staying inside and leaving the WR with a one-on-one matchup with a corner. 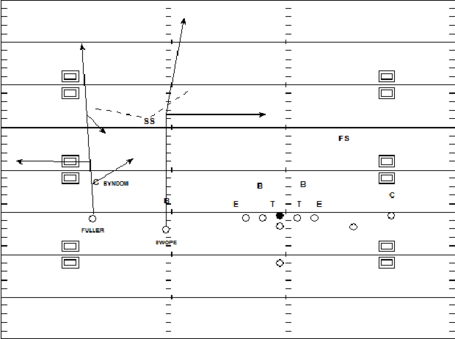 This exact scenario played out a couple dozen times that night, and Byndom and crew won almost every battle. Swope was a non-factor, thanks to being overrated in the first place and now finding himself covered by more defenders than he's capable of handling. Normally, this means Jess Fuller finishes with 12 catches for 200 yards. Normally, he is not facing corners like Byndom. 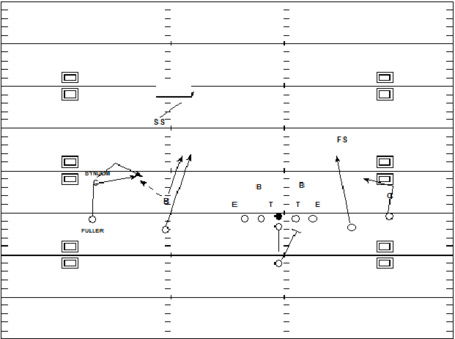 Byndom's pick 6 is the most important example. It's a three step slant read perfectly by Tannehill. The slot defender ran inside with the lookie (basically a quick seam route), leaving Fuller alone outside. Byndom simply ran his route for him, beating him across his face while taking Fuller's girlfriend and knocking over his sandcastle. This was the single most important play of the game.

3. Ryan Tannehill was not ready for all the stunting in the secondary.

Good west coast QBs are servants of the system. This guy does this, you do this. You look here, you throw there. Ryan Tannehill is well schooled, which is why he threw to Fuller on the slant. Fine read, bad outcome.

Kenny Vaccaro's interception was another robot throw by Tannehill. This was the pre-snap look Tannehill got: 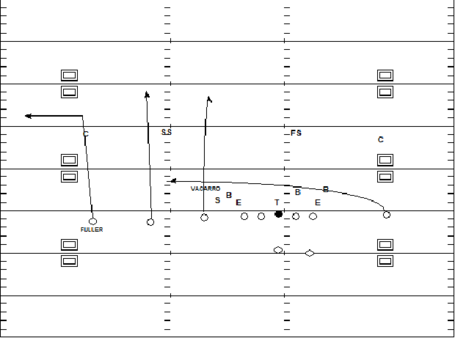 Looked like your typical 4-across quarters read, which it was, sort of. Tannehill expected the flat coverage to run with one of the inside seam routes, leaving Fuller alone on the outside. The quirk in the coverage was that Texas dropped 8, putting an extra guy to the trips side who Tannehill never saw. As hard as it is to tell what a QB is looking at from 480p clips on YouTube, I'm certain he was looking at Acho drop underneath the seams the whole way. 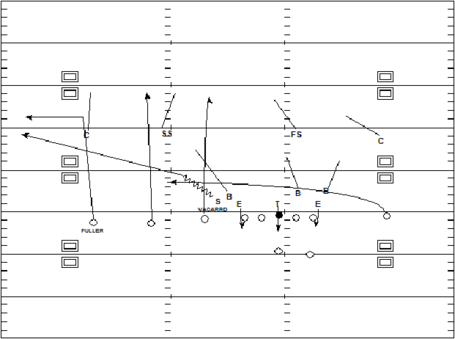 This made him think nobody was going to get underneath Fuller's okie route, and even with a 4 deep 4 under defense, there probably shouldn't have been anyone there anyway. Vaccaro backed off before the snap, turned and ran underneath Fuller, and read his route perfectly. Tannehill turned to throw and never saw Vacarro there. This is the majesty of Manny Diaz's defense. He doesn't always guess right, but when he does, his guys come out of nowhere right where you don't want them to be.

4. Quandre Diggs is made of magic

I got in a debate once about who was a more valuable player, Morris Claiborne or Tyrann Mathieu. One side argued for Claiborne and his shut-down ability. I argued for Mathieu and his off-schedule wizardry. You know what you'll get from Claiborne, but Mathieu will do something a couple times a game that you'll have never seen before. I believe that is more valuable.

Texas has the exact same situation now. Carrington Byndom is the guy who stays in your hip pocket and makes you play perfect football to beat him. Quandre Diggs will appear in a puff of smoke and rob you of the football in a way you weren't sure was possible. His INT was a perfect example of his ninja skills.

The play was a basic high/low read on the outside linebacker (it's possible this was supposed to be another 3 step route like the slant to Fuller and Tannehill just threw it super late. Tough to tell because he stares down the route the whole way and shows no sense of urgency at all). 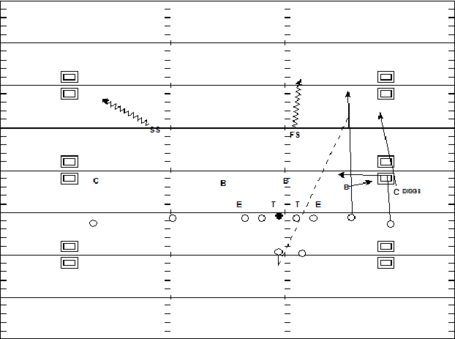 If the backer ran with the seam, Tannehill would fire underneath to the in route. Texas was looked to be in quarter/quarter/half coverage, meaning two players would be responsible for a quarter of the field (Gideon and Diggs, in this case) and another would take the other half (Scott?). This leaves the LB to the sideline with the flat area, and that's where he went, leaving the seam route open.

This is where the ball went, and although Tannehill was late with his throw, it would have been a completion against just about any other team in the world. 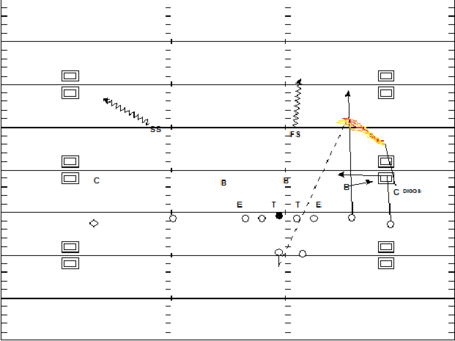 The first diagram shows what should have happened, this second one shows what did happen, complete with Baller Flames coming out of Diggs' ass. He had no business making that play. That ball should've been completed and nobody on Earth would've blamed Diggs. That fact that he prevented a completion is remarkable enough but the fact that he caught the damn thing and started the avalanche of misfortune that would end up crushing Tannehill and the Aggie offense is, frankly, the only case I need to make as to who he's my first pick if we're drafting a defense.

Some players multitask better than others. These players can see things before they happen. They can do their job while simultaneously patrolling the grounds for other things to do. Earl Thomas had this ability. Tyrann Mathieu has this ability. Quandre Diggs has this ability . . .

5. That punt return, too

. . . in more ways than one. Byndom will do more for you over the course of the game, but Diggs will do one or two things that will burn themselves into your brain. Byndom is global warming, and Diggs is a massive solar flare that ends all life immediately. Take your pick, humanity.