Share All sharing options for: Tumbling To Earth in 2012: Oklahoma State, Baylor, TCU

All three teams are poised for a fall after completing historic 2011 seasons. Oklahoma State finished 12-1 with a BCS win and a legitimate gripe at being refused a national title shot, Baylor rode a Heisman Winner to a 10-3 year featuring wins over Texas and Oklahoma, and TCU went 11-2, part of an amazing five year Horned Frog run of 47-5.

All three of these teams are headed for a decline in 2012, despite preseason magazines that seem strangely optimistic about TCU and OSU's chances. That's a tribute to both programs and their recent run of success, but also evidence that prognosticators tend to rely more on a general feeling of Top 20 belongingness than working through cause and effect. 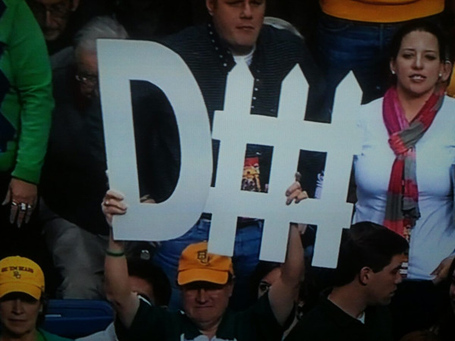 Faith is valued at Baylor

Baylor's decline seems straightforward enough. Despite returning 14 starters, they lose singular talents in RGIII and Kendall Wright, NFL draft picks like Ganaway and Blake, and their downtick on offense will prevent the compensatory output required to outweigh a still-bad defense. Baylor isn't going to fold into a 3-9 debacle - Briles has real talent on campus now and it's getting developed - but 6-6ish looks like their most likely destination and their possible +/- win deviation looks to be a narrow 1. That's unless Nick Florence is a secret Colt McCoy or Phil Bennet discovers defensive coordination ideas in a decade outside of the 1990s. @WVU, @Texas, @ OU does them no favors either. Pencil those three losses in now.

Take last year's 10-3 Baylor team that averaged 43 ppg, peg them at this year's more likely 30ppg, and you're hoping for .500. That's what Baylor fans should pray for, too. 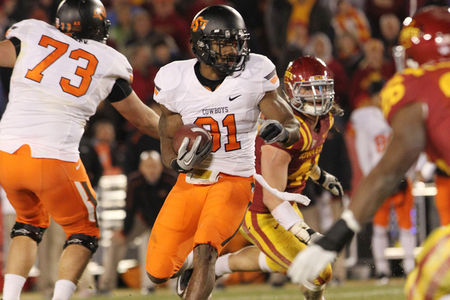 Blackmon not back, mon.

The majority of publications still have them ranked firmly in the Top 20 (Phil Steele has them #12) which is a performance by experts paralleled in stupidity and incompetence only by the scientists in Prometheus. Please, take off your helmets in a chamber of seeping alien biological materials and now attempt to pet the predatory snake creature hissing at you!

But enough about Stillwater and T Boone's trouser eel...

They'll be starting a true freshman at QB, their entire WR corps is gutted, and the OL talent will take a step back. So not only is Lunt going to have a steep learning curve, but his natural support mechanisms won't be there. David Ash has great sympathy for this predicament. We're glibly assured that OSU will rely more heavily on Joseph Randle and Jeremy Smith early to take up the slack, which would be heartening and persuasive if I didn't actually watch OSU's games and understand football.

Last year's OSU running game was explosive because OSU's passing game terrified opposing DCs. They had a great WR corps and a 43 year old QB throwing darts without conscience on quick recognition and untouchable three step drops. Randle and Smith feasted on 5 man fronts and dime personnel to the tune of 1800+ rushing yards at 6.2 yards per carry and 33 TDs. That kind of crazy efficiency CAN'T be repeated. At least against reasonable defenses. Not even a rough approximation. They will run more often, much less effectively, and without a running threat at QB, their running game can and will be throttled when needed. I'm happy to let a freshman QB try to beat me throwing to a new WR corps. I'm not robbing run-stopping Peter to pay pass protection Paul.

Also, consider that OSU played a wide open offense last year with minimal turnovers, finishing the year at +21, +1.6 per game (yes, some of that was their D inordinately forcing turnovers, let's just assume that's static, even though they'll force fewer). Experience at key positions meant they weren't punished for being edgy. They had 7 games where they finished with at least +2 turnovers. Only 2.3% of Weeden's passes were intercepted on 565 attempts. That holds? No.

Finally, while OSU's defense will be good, winning ugly really isn't their forte. They're not constructed to take the air out of the ball and Mike Gundy isn't going to play Tresselball at the expense of QB development. They will take their lumps and look to 2013.

It's a credit to OSU that they still will surmount these myriad challenges to go 7-5ish with a minor bowl win, but I felt obligated to lay down a spike strip on the prognostication clown car parade route. 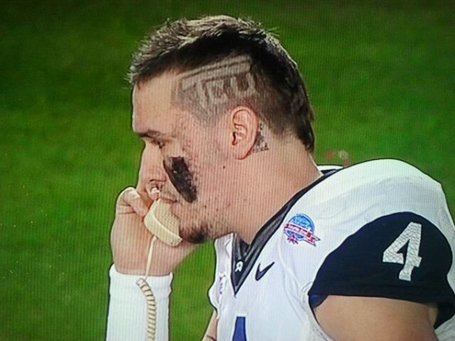 When will things get back to NORML in Ft Worth?

The stench of purple patchouli has not penetrated the protective stench cloud of 'maters n onions favored by national sports media. TCU ranked in the Top 20 is a classic example of "Yeah, but still..." as argument. The predictors are fully aware that TCU lost several starters to killjoy narcs, that rest games against SMU, San Diego St, and New Mexico are nowhere on their Big 12 conference slate, and that the secondary and offensive tackle appear to be areas of growth and inexperience.

"Yeah, but still...." You can't never count out Gary Patterson. TCU has been 47-5 over their last five (Patterson is 109-30 overall). They won the Rose Bowl. They beat Boise St. How can you argue against their success?

By looking at their schedule, players, weaknesses, and match-ups. And factoring in a light spritz of the stink of program implodey-ness, which Ft Worth is currently spurting like a geyser.

TCU will feature a very good, completely underrated WR corps, a rock solid QB, and a solid interior OL. Puff, puff, passing game. They'll also have inexperience at OT and a defense with a surprising paucity of studs or experience. Last year's uncharacteristic 21.5 ppg allowed average wasn't an aberration. It's a predictor of what's to come in 2012. This team isn't better on defense and the offenses they'll see every week are going to be capable of punishing weak links. TCU is going to have to win some shootouts.

Their schedule reads favorable early - a 5-1 or 6-0 start is no stretch - but it gets ugly quickly with games @ OSU, @WVU, @ Texas and home stands against OU and Kansas State. Stringing those games together at the end of a season on a defense struggling with depth issues is no small thing. I expect TCU to decline by three or four wins.