A look back at the 2011 Texas Longhorns Offense

Share All sharing options for: A look back at the 2011 Texas Longhorns Offense

The Wyoming game is no longer weeks away. Which means it's only a matter of days before Longhorn fans around the globe all across the Grande subscriber area are going to be tempted to render an opinion about how the 2012 offense compares to the one that Texas fielded last year. I'm no different. But I wanted a little context before I started making bold proclamations that might look silly in retrospect. So I took a quick look at the production of the 2011 offense. Here's what I found.

Here’s a chart showing all of Texas’ meaningful offensive drives in 2011. (The chart excludes time-killing drives at the end of halves). The opposing teams are ordered from best to worst defense (according to adjustedstats.com). For those of you who have trouble with numbers, the background has been shaded red, yellow, and green to highlight the elite (top 15), decent (16-60), and subaverage (bottom half)* defenses that Texas faced throughout the season. 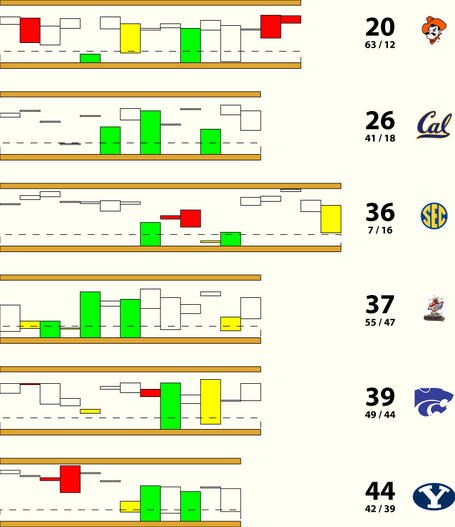 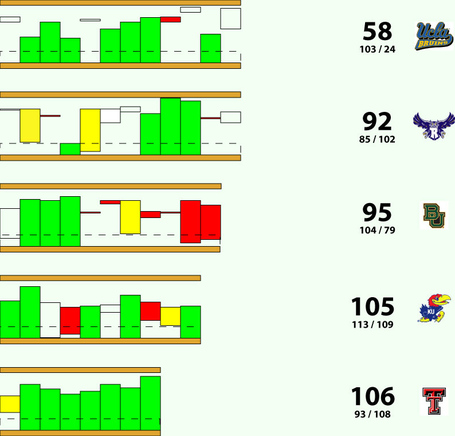 I think it would be interesting to look at the chart and reexamine some of the memes that took root last season--about the QBs, the effect of injuries, etc. But I don't want to make this entry too long/controversial, so I'm going to stick to higher level analysis. (Feel free to take up any issue you'd like in the comments section).

Observation #1: There is plenty of room for Texas to improve against elite and decent defenses.To save you from having to count, the Texas offense scored:

To put the 2011 offensive output into perspective, here’s another infographic showing how it measures up against the production of other recent Texas teams.***

(if you can't read the text, click on the picture).

Observation #2: Texas must improve its offensive output against elite and decent defenses.

If you do the math, even as good as the team’s defense is, the Texas offense needs to improve before the team can (A) challenge teams with elite defenses [0 for 2 in 2011; 3 total red zone trips] or (B) consistently beat teams with decent defenses and decent or better offenses [3 for 5 in 2011; 3 to 4 legitimate scoring drives per game].

Observation #3: It will be difficult to tell how much the offense has improved until after week five. The first three teams on the 2012 schedule fielded the 83rd, 114th, and 70th best defenses in the FBS last year, according to adjustedstats.com. And they were 111th, 106th, and 96th best at stopping the run. Then week four is a bye week.

Question for the BC readership: Are you going to watch the first three games with an eye for something specific that you think will indicate whether the Texas offense has improved enough for the team to have a legitimate shot at beating the toughest teams on the schedule? If what you're watching for is easy enough to track with stats or video highlights, I might try to do it. Then, at mid-season, we can all laugh at each other, hand out tote-bags, etc.

Disclaimer: Even though there is math involved, this isn’t supposed to be exact or precise. I’m sure I screwed up a calculation here and there, and ESPN’s drive charts were occasionally wrong. I fixed the ones I caught. I’ll be happy to fix any more that you catch.

* Excluding the Iowa State game, in which the Texas defense gifted the offense four drives that started in or just outside the red zone.

** Note: I rounded UCLA "up" into this group, because their run defense was so poor.

*** Note: I didn’t exclude special teams and defensive scores from the points scored by the earlier Texas teams.

**** These numbers exclude the 2 drives that the Texas offense gifted to RG3 on the 11 and 2 yard lines.