Share All sharing options for: Embarrassing Moments in Longhorn Fandom

Brickhorn and I were texting today while bored at work, randomly cataloging the low water marks of Texas Football Fandom as underworked, overpaid bloggers often do. You've already read at least 100 different articles, diary entries, and photo essays about where somebody was on 4th & 5 when VY triumphed over USC, but coming off a combined 12-12 regular season record over the past two seasons, we decided to raise a glass to mediocrity and toast shame & scandal.

Because these dark days are about to be over.

After about 30 exchanges we realized there was enough material to supply a Ken Burns documentary, but here are the lowlights. From our iPhones to Darrell K. Royal's ears ...

The Branding of Bevo

Many moons and about 13 Bevos ago in 1916, some pre-Military Cult Aggies had a rather ingenious idea to kidnap Texas' prized steer and brand the score of the prior year's Aggie triumph over UT. This would be their last good idea. Never mind the fact that Texas had just beaten A&M 22-7 on Thanksgiving Day, which marked Bevo's debut as the Texas mascot. It's these selective memories that would go on to serve future generations of Aggie faithful for centuries to come. [editors's note: BC's very own srr50 was a sophomore journalism major at the time].

Silver lining: This historic event later inspired to the Texags Internet legend that was Branding Iron 13-0, perhaps the most delusional person with Internet access since echeese circa 1999-2008. They currently live together outside Frisco.

Ah, the forgettable years. Seprated by four decades but kindred in their futility. Both coaches went up against dominant rivals that quickly rendered these Texas teams irrelevant. For Price it was Bud Williamson's Sooners that dominated an entire decade in the 1950s. For McWilliams it was Jackie $herrill's and RC Slocum's Aggies.

Silver linings: They led to the hirings of Darrell K. Royal & Mack Brown.

After suffering the worst loss in Longhorn history, at home no less in a 66-3 mutilation by UCLA, booster Joe Jamail asked Deloss Dodds: "How much money will it take to get my name off that field?"

"I remember sitting back watching Marty Cherry take a beating," WR Wayne McGarity said. "They beat us so bad they sent a guy into modeling." 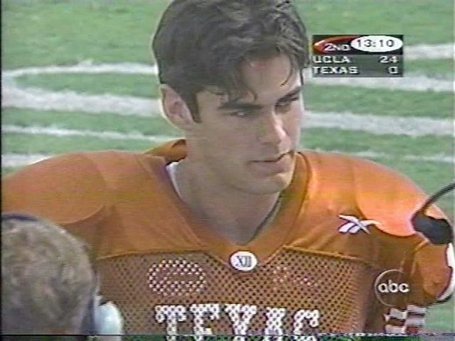 Silver lining: The embarrassing defeat led to hiring of Mack Brown, a far better coach would go on to never, ever, never, never, evernever embarrass Texas fans by losing a game by 50+ points. Ever. Except in 2003. And almost in 2000.

John Mackovic: "Sometimes you're going to lose to a team like Baylor"

No, John. Sometimes you are going to lose to a team like Baylor. Texas is done with that shit, for a while anyway. Enjoy your pink zinfandel, white miata, and seasonal ESPN gig. Deloss, get Gary Barnett Mack Brown on the phone.

Hey, ya think someone ought to teach that freshman linebacker how to block on the punt team? Little known fact: Terrence Holt, younger brother of the departed All-American wide receiver Torry Holt, blocked two punts that were converted into touchdowns for North Carolina State. He was never seen again on a football field or anywhere else.

If any one player is most responsible for the Longhorns' post-1997 resurrection, it is Ricky Williams. The dreadlocked Californian won two consecutive rushing titles and the Heisman Trophy and carried the team to a stunning 9-3 record in 1998. That was awesome at the time. With his laid-back demeanor and unparalleled combination of speed, power, and grace on the field, Ricky became a national icon. Texas fans couldn't have been prouder of their shy, unbelievably talented running back. This is all well known Longhorn lore. 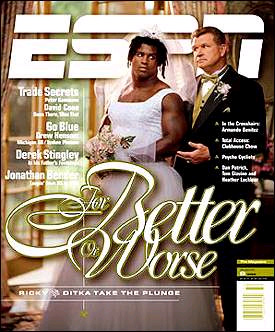 Until he was drafted into the NFL by the New Orleans Saints. Iron Mike Ditka traded his entire draft for the right to select Ricky. Ever an outside-the-box thinker, Williams eschewed the sports agent establishment and sought representation by renowned litigator diplomat competent layman rap "star" Master P. The resulting contract was an incentive-laden nightmare of unreachable milestones. But by far the most ill-conceived part of the deal was a clause requiring Ricky to wed Mike Ditka in a small, intimate ceremony.

Silver lining: According to long-standing marital custom, the wedding absolved Ricky of any future obligation to perform oral sex. He also signed a pre-nup which let him keep all 34 pounds of weed in his possession if he failed to reach said contractual obligations. Four years later Rick was doing Ashtanga yoga in a tent outside Perth.

All those who though Vince Young was at least a slightly better college quarterback than Chance Mock, raise your hands! Well, apparently our coaches at least briefly disagreed with you.

Greg Davis' 15 scripted plays to start each and every game

"Good plays have a script. So do movies. And TV shows, too!," thought Texas offensive coordinator Greg Davis as he inhaled fists full of Crunch 'n Munch during the local library's puppet show. It was the one about a dashing knight who saved a pretty princess from a mean, smelly ogre. Greg liked that one. He liked all the puppet shows, really. Especially in the summer. Summer was hot in Texas. But it was always nice and cool inside the library. And the librarians were always so kind to him. They never made fun of his weight. Or his accountant glasses. And they gave him a shiny new bookmark every time he checked out a book! This time, he checked out "Scary Ghost Stories" and got the bookmark with a snowman suntanning at the beach and the words "Reading is cool!" on it. Greg liked that funny snowman.

Usually during the puppet show, Greg just sat politely and clapped when the puppets did funny things. But this time, the puppets gave Greg's brain an idea. If puppets and movie stars followed a script, why not football players? It was a good idea! After the handsome knight slayed the mean old ogre, Greg clapped and cheered with the other kids and went home to work on his new plan...

At least that's how we assume Greg Davis came up with the idea to script his first 15 play calls every game. Of all the scenarios we consider likely, it's the most dignified. Read it again with a glass of single malt and a fine cigar.

You've all seen the script:

1. Horizontal pass for no gain

3. run between tackles on third & long

Unfortunately, it rarely worked. Against teams with even a barely competent defense, the script was a sure-fire waste of 3-5 possessions. Any offensive scheme that makes Brent Venables look like Dick Lebeau is not to be trusted. Texas surely lost a few it should have won solely because its offensive coordinator didn't care to think on his feet during the first quarter. Or on his ass from the pressbox staring down at the Houston Yellow Pages.

Despite this stunning lapse of judgment, Davis managed to win a Broyles Award for delivering zone read wizardry to the college game. Never mind that eight other coaches had previously dazzled the college football world with zone read optiony stuff or that Vince Young was the actual offensive coordinator during the 2005 season. 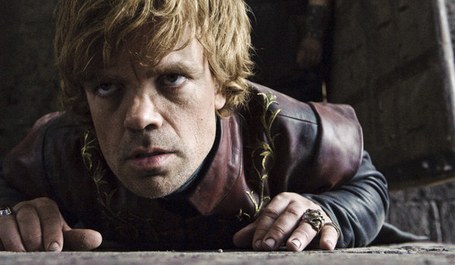 "OU's undefeated, but who have they played?," I said to a friend as we strolled confidently through the cold rain. "And we lost to Stanford. Big deal. They're a pretty good team and they snuck up on us. Besides, Tiger Woods was on the sidelines and promised the whole team a raft of hot tang if they beat Texas. OU's got nothing but a gimmick offense. We survived their tricks last year, and we'll do it again this year. We're going to smoke those fuckers."

Even through a torrent of Oklahoma first-half touchdowns, my confidence did not waver. Not until halftime, when I finally looked up at the scoreboard: 42-7, bad guys. I knew it was bad, really bad. But I had lost count. 42-7? Really? Remotes flew, bitches were kicked, cherished pets hid in closets. Some wives have yet to return.

In what would become an annually recurring pattern, seething rage was followed by drunkenness and depression, which were followed by steadily rising hope over the year culminating in confident certainty ... which was then shattered by another gut-punch of a loss and a rebirth of the whole cycle. For five years, October was a miserable time to root for the Longhorns.

63-14. A frozen, rain-soaked, sausage spewing, monumental ass-whipping in all phases of the game. Pure hell. Second only to the invasion of Normandy.

14-3. We outplayed those fuckers for four quarters, only to give up a cheap drive to their backup QB and a disastrous INT for touchdown that shall never be mentioned here again. 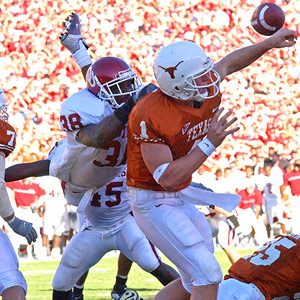 Into masochosm are you? Please, come inside.

35-24. Rod Babers had me convinced that the two loss streak would be broken with a pick six in the second quarter. An unnecessary 2-point conversion to end the first half and Greg Davis's adoption of a "keep our exhausted defense on the field for the entire second half" strategy fucked that all up.

65-13. Vince played pretty well. No one else did. I threw a beer bottle at my TV while my in-laws stared in shocked silence. I have a feeling I'm not alone there.

12-0. Vince. Cedric. 0.0 points, Mr. Blutarsky. I remember passing a friend on the street as I walked to my apartment immediately after this game. His reaction: "You okay? You don't look so good." My response, muttered drunkenly under my breath without stopping to acknowledge his selfless concern for my health: "Fucking Greg Davis motherfucker fucking fuck shit, mothershit fuck..."

Silver lining: It's only a game. At least that's the lie I told my anger management instructor after "I will go to my grave convinced that shoving fat, Okie-loving hag into a vat of fried butter was God's Holy Will" failed to persuade him that I was no longer a threat to society.

"I'll Answer That for Chris"

Let's face it. The Chris Simms era didn't exactly get off to a good start. Dude showed up on campus as a freshman in a limo. Then he was given the starting job over the greatest Ginger QB of all time without ever really earning it. But the nadir of the contentious Chris Simms era was Mack Brown's coddling of the Golden Boy after his third consecutive loss to the Sooners. After going mute at the post game press conference, DiploMack took the wheel and provided our rivals with enough soundbite cannon fodder to blow up an RV park. 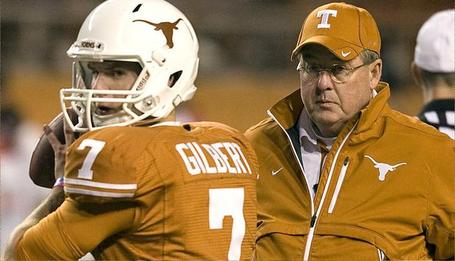 The only expectations that weren't heaped on Garrett Gilbert were the lead role in Waterworld 2: A Shitload of CGI Waves Gone Wild and a sweet side gig as Cleve Bryant's west side pimp. But he was promised pretty much everything else, including the starting QB job at Texas back when he was a 6th grader at Lake Travis middle school - before we had even recruited Vince Young. That was the first mistake. The second mistake was not benching him after throwing five picks on the road at Kansas State. Everything else is Lite Ranch salad dressing. Window dressing? Whatever. SMU babes don't care.

These are our editors' select lowlights. What are yours?