Linebacker play in the 4-2: Replacing Acho and Robinson

Share All sharing options for: Linebacker play in the 4-2: Replacing Acho and Robinson

Keenan Robinson and Emmanuel Acho were both key figures in the Linebacker Renaissance that has taken place at the University of Texas, spearheaded by Will Muschamp. As has been typical in our revolving-coordinator defense, neither of them were really recruited for the Muschamp system. However, by the time of their recruitment Mack had overseen a philosophy of finding faster linebackers to match the stresses placed by spread offenses after a 2007 season in which Texas had one of the least athletic back 7's in the conference.

After the Longhorn internets buzzed for the inauguration of the Muckelroy-Norton-Kindle era of linebacker play, it was actually Robinson and Acho who quickly seized control of the defensive backfield and have contributed 6 (or 5 1/2) seasons worth of starting snaps and defined much of our defensive identity for the last 3 seasons.

Of course, we've seen flaws in that identity that have resulted in a clamor for the next generation of backers which Diaz will have to find amongst what Muschamp left him. In this article we're going to examine exactly what it is that Diaz wants his linebackers to do on a regular basis, and then we can understand what types of players we are looking for and which guys on campus are built to excel in this system.

While Texas' base defense is essentially a 4-3 with multiple fronts, the personnel of our opponents necessitates that we play in nickel the majority of our snaps. While Texas isn't a 4-2-5 defense in the sense that TCU is, there are very few practical differences between what our front 6 is asked to do and what the front 6 frogs are doing.

Some teams play a hybrid LB/S player in place of a SAM linebacker who basically aligns to the field side (rather than over the TE like a traditional SAM) and is more or less responsible for that expanse of grass.

In the Diaz system, the SAM player aligns in the same way. However, because Texas plays a considerable deal of press man coverage our SAM is probably better described as a C/S hybrid player. Someone who can handle traditional man-coverage while still offering safety-caliber run support.

Even with a brutal hammerer like Vaccaro on the field, this isn't a guy that we are going to ask to fill in gaps between the tackles. So, the gaps between OL or TE are going to need to be filled by the DL and the 2 remaining backers. 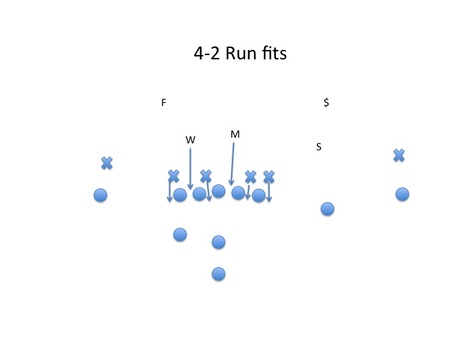 In the image above you can see that a nickel response to the spread doesn't absolve 4-3 linebackers of traditional duties like taking on OL. In fact, it essentially transforms the Weakside backer from a free-ranging rover into a 2nd inside linebacker, while also freeing the weakside defensive end to attack the perimeter.

In the 4-2-5, the DL and ILB fill in the interior gaps against the run and stretch out the play where all the speed afforded by having 5 DB's and pass-rushing DE's on the field can bring ruin to a running game. So in base defense, the ILB's need to be strong gap-fillers.

But then, as we are all mostly aware, Texas doesn't stick with just the basic run fits of the front where a front 6 player takes the gap he is aligned into. Using slants and stunts, Diaz will mix up who has which interior gap.

An underlying philosophy of Diaz's is that OL are amongst the least athletic guys on the field and a defensive philosophy should seek to take advantage of this, rather than running right into them and allowing them to do what they do best, move people. He wants opposing lineman to have to think, react, turn, and move their feet.

Stunts are by necessity less sound than basic run fits, however the confusion and quick movements required of the OL to respond to them flip some advantages back to the defense who no longer have to just respond to the movements of the offense. Building a veteran OL that has the strength to drive college defensemen, the athleticism to respond to defensive speed, and the experience/knowledge to understand how to handle stunts within their 4-5 years of eligibility is a task that Diaz is betting against occurring on a regular basis. 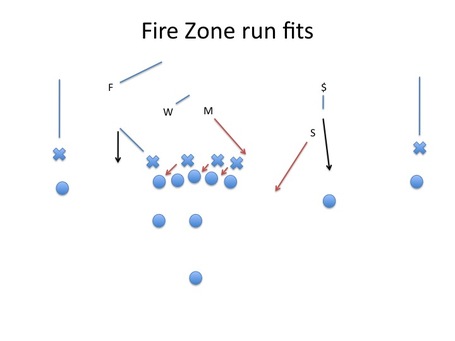 To really maximize this advantage, the ILB need to be explosive to their initial assignment, then fast enough to recover if their stunt takes them out of the play.

Acho and Robinson excelled in this department and were roughly average in filling gaps in base defense. Last year, Texas defended approximately 456 pass attempts and 409 run attempts (QB scrambles or sacks are included in run attempts), so run defense for a Texas ILB comprises less than half of their responsibilities in a season. The other half,

Now, in a fire zone, if their assignment is to blitz than the backer is just flying into the line and trying to find a way to the QB. If it's not to blitz, it will generally be one of the following coverage drops (in order of likelihood): Hot 3, Hot 2 to the field, Hot 2 to the boundary, deep 1/3 (I don't think we've seen this outside of the Red Zone). 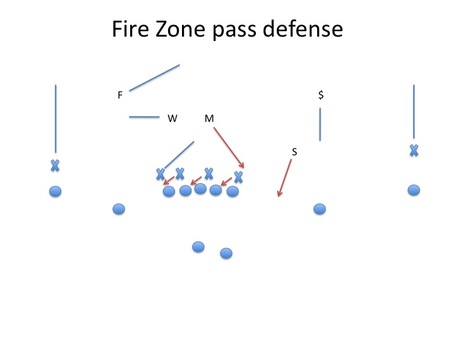 Hot 2 to the field is typically the easiest of assignments in terms of it's demands for speed, thus it's usually occupied by a DL dropping back, here the Will takes it on so the DE doesn't have to keep up with the removed #2 receiver. Hot 3 and Hot 2 are more commonly occupied by linebackers. Hot defenders first spot drop to the areas of the field which are usually used by receivers who are using a hot route to give the QB a quick option against the blitz. If the QB makes a five step drop the Hot defenders start backpedaling 10 yards back or so.

Y Stick is a common 3 step drop spread pass play that is often paired with Inside Zone by AirRaid teams. Here's Y Stick against a Fire Zone with the Middle Linebacker dropping into Hot 3. Keep in mind that there is a run fake occurring to draw the Mike's attention to his interior gap assignment. 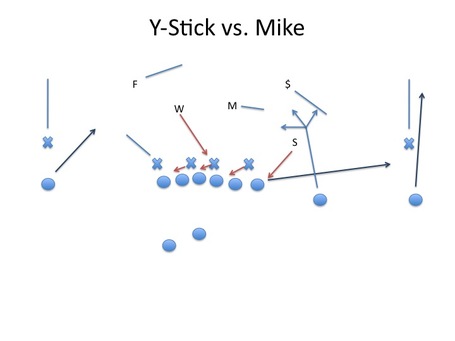 McCoy used to complete this route to Shipley numerous times in every game of 2008. The #2 receiver heads 4-8 yards upfield and then finds a soft spot against whatever coverage he finds. In a Fire Zone, he's finding a soft spot between Hot 2 to the field and Hot 3. The Strong safety heads to his zone drop, and is then going to be drawn to the TE's route to the flat. Thus, the Mike is isolated against the slot receiver.

Spread playbooks are filled with plays that are designed to isolate inside linebackers against shifty receivers in space, and to attack every point of the line of scrimmage in order to outflank the defensive front.

If the linebackers aren't trying to break up a timed throw to a slot in the middle of the field they are having to backpedal like safeties in order to contest deep throws down the seam by the QB.

The bubble or flare screen has cause great gnashing of teeth from Longhorn fans but it often produces the same effect in opponents who are trying to stop Tech or OSU from gaining another 8 automatic yards with the play. In the following image you can see the stress caused by the screen on the linebackers playing in our base Cover-3. 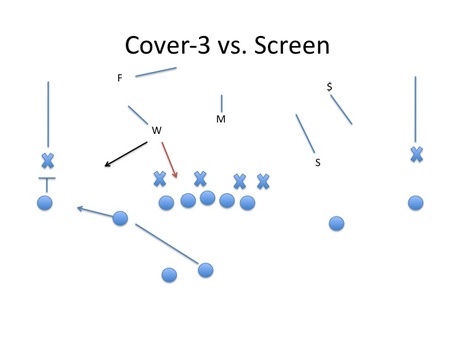 The weakside, or boundary, backer is protecting the seam on his side. First he's reading the play to determine if it's a run or pass. If the former he's filling the B gap and spilling the play out, but instead it's a quick hitting flare screen and he's chasing a slot receiver to the flat after giving up big head start.

In our man coverages, such as Cover-5, the Will is actually running with that slot receiver up the seam if necessary. In that coverage, the Middle linebacker takes receiver #3 on his side of the field, in this instance a running back. Against a team like OU this means that the middle linebacker is chasing Roy Finch.

This is why Diaz prefers to mix in confusion and blitzes so that the offense doesn't have a clear idea of how to get these matchups, or the time to execute them in rhythm.

The Spread offense puts tremendous stress on inside backers. In a base defense call with a normal front and Cover-1 the inside linebackers are either going to be filling interior gaps against OL or chasing inside receivers in man-coverage. Against the spread this can be particularly rough since the inside receivers and RB may be the likes of Roy Finch or Ryan Swope.

In a stunt or Fire Zone call the backers may be either stunting into gaps or racing to zone drops against receivers.

Getting a good picture of what it looks like to be a Big 12 linebacker? Even the best of the best are routinely in position to be made to look ridiculous because of the enormous variety of tasks they may have to perform on a given play.

This is why Diaz prefers to be on the offensive where possible, so that he can dictate the terms. But his methods still require speed, versatility, and athleticism. Last year, speaking on Keenan Robinson and Steve Edmond he said the following about Edmond:

"Steve has a little bit of an unusual skill set for his size," defensive coordinator Manny Diaz said. "In this league, with it being a (open) space game, I don't know that there are a lot of players bigger than 250 pounds who can provide what we want."

And about Keenan Robinson:

If I could make him out of clay, that is what I want the middle linebacker to look like," Diaz said.

The number of instances in which the ability to fill a gap effectively is utilized by an inside backer in our scheme against our opponents, while frequent, are heavily outnumbered by the instances in which athleticism and speed will be necessary.

If you read Diaz's quote again you may notice that Keenan Robinson may not necessarily exactly form the ideal middle linebacker. He has all the physical attributes, but not necessarily the mindset. in addition to possessing a 230-250 pound athletic frame that can handle running into OL or running after Ryan Swope, the player has to have the mindset of someone who can't wait to run after Ryan Swope or through a lineman.

Jordan Hicks seems to have all the necessary traits to either excel, or not be poor, at each of his likely tasks. Steve Edmond is a player who will be exceptional anytime he's sent into the line, but his ability to handle the other jobs are suspect. As we saw in the Robinson-Acho era, because of all the stunts and blitzes it's easier to hide a backer who doesn't love contact with OL than it is to hide a guy that can't run well enough.

If Springball story line no. 1 is "Can Donald Hawkins play Left Tackle?", then no. 2 is either "Can Ash pass QB 101?" or "can Edmond play well enough against the spread to stay on the field?".

If he can be backpedal into the seam, disrupt a throw over the middle, or chase Roy Finch to the flat: then our defense gets a lot better. If not, Diaz knows how to get by with the little guys. And Edmond? He can join the ranks of failed spread linebackers in the past and take his place with Sergio Kindle and Ronnel Lewis in the hall of unrealized potential ;)