There's nothing more amusing than the unease induced on the Longhorn interweb by the commitment of a relatively unknown 3 star defensive back recruit (unknown at least to most Longhorn fans), particularly when that recruit's iPod is filled with Coldplay, and DVR is filled with 30 Rock. I'm speaking code!

Scipio does not like the blue-eyed devil in his defensive backfield any more than the next virulent racist; however, in the interest of fairness, John Lynch, Jim Leonhard, and Eric Weddle, it's probably useful to do some stuff like learn about the recruit, watch his film, and actually evaluate the take before spraying the internet with arcing streams of reactionary wee-wee. 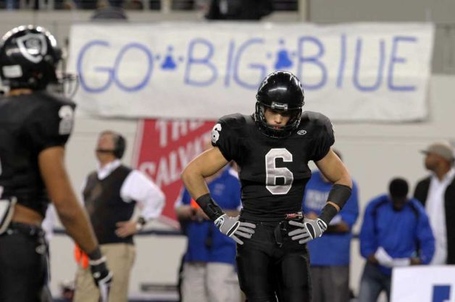 Huhn battles the reactionary bias against white DBs, aka Gideonism. I won't argue against that because that's arguing against emotion and projection, which if I want to indulge, I'll just question my girlfriend's shoe purchases. The more legitimate concern for me is that he plays for an outstanding "program school" that - like a Lake Travis or Katy - plays dominant high school football by virtue of scheme, continuity, and maxing out 17 years olds to pummel less coached-up peers. Sometimes those guys plateau quickly. And yes, I know Steele has better baseline talent than those programs, but they're not exactly LaMarque, either.

He also battles the Longhorn fan's tendency to believe that anyone he is not familiar with must be marginal. Huhn's best offers were TCU, OU, Nebraska, and Georgia. Not shabby. Agreement from TCU and OU on a prospect always gets my attention, largely because of their aptitude in assessing translatable characteristics for position switches. So much of evaluation is definitional - Huhn is a bigger athlete as a junior playing safety than Peter Jinkens was playing linebacker as a senior. You do the math.

The other level of inference about suitability is his 40 time, which appears to be in the legit 4.5/4.6 area, but straight line speed isn't range, range is what matters, and that's what the game tape is for.

Finally, Duane Akina worked him out in the spring and summer, the other coaches had their chance to call BS, and they all thought he moved well enough to play for Texas. Presumably, almost none of that workout had him sitting in two deep coverage.

Beyond the exciting world of inference, you can actually watch Huhn play football. LOOK AT THE GAME TAPE!

Huhn's film is available on Hudl or in a more condensed version on HornsNation.

Huhn plays for Cibolo Steele largely as a two deep safety defending the pass as a center fielder and supporting against the run with quality violence. In run support, Huhn does a nice job of closing on the ball and arrives in good tackling position. Unlike some hitters, Huhn makes the sure tackle as adeptly as the kill shot. I was most impressed when a play strung out wide and he shows good lateral movement followed by the ability to plant and accelerate through the tackle. Most athletes struggle to recover from that angle. Very WLB. Clearly, Huhn has no problem with contact.

In coverage, he's playing a lot of zone and off man coverage. Huhn catches some easy fly balls, but he also has a couple of nice breaks on outside routes that show some range and anticipation. He also catches well, which is refreshing. His side-to-side is just OK - we won't confuse him with Earl Thomas getting to the post corner - but I like his ability to eat up ground quickly and decisively when opponents throw in front of him. In that respect, he reminded me a bit of former Longhorn safety Lee Jackson. Plenty of instincts, loves to mix it up.

Projecting the 6-2, 205 pound kid who loves to hit and runs pretty well is a perilous business (and along with the 6-1, 225 pound fullback, apparently the basis of TCU's entire football program). Some athletes maintain their athleticism while adding 30 pounds of muscle (see former whippet Keenan Robinson), others keep getting more athletic and stay in the same range, but the bulk of them remain as tweeners: not quite fluid enough for safety, not quite big enough for linebacker. However, spread offenses and mutant TEs give still give that athlete some value. The 6-2, 220 WLB/blitz nickel who plays bigger than his size and runs well is a nice tool to have.

Huhn's commitment is also indicative of the Longhorn coaching staff's perspective on in-state DB talent. I suspect we have two more scholarships to give and our preferred candidates lives outside the Lone Star State.