There's Longhorn football in Austin on September 1st, 2012 and for those of us who can't make it in person, it will be widely available on ham radio and Barking Carnival's riveting Live Game threads. In my early non-con preview, I called Wyoming a Respectable Sacrificial Lamb; offered at our altar to serve as a useful potential scout for the types of offenses our defense will see all year, a proof to see if our offense can dominate lesser defenses.

Generally, with these kinds of games I focus less on breathless player breakdowns and try to get a general sense of how a weaker opponent may test us schematically in ways that might be projectable to other games and then focus on a few individual match-ups that can give us an idea of how we've improved at select positions.

If you're interested in depth chart breakdowns from a Wyoming perspective, Cowboy Altitude is a great resource. 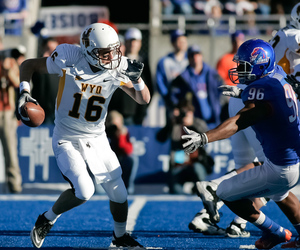 Last year, the Cowboys went 8-5, their second bowl appearance in the last three years under head coach Dave Christensen. Christensen (former Mizzou OC) is a master of the slow bleed spread, attacks defenses with a thousand different cuts and formations, and is at his best when he has a QB to use in the running game to create balance.

The best QB on the field will be Wyoming's Brett Smith. Last year, the 6-3, 195 pound sophomore flashed major ability (415-253-2622-20-11 passing, 139-710-10tds, 5.1 average rushing) combining for over 3300 yards of offense and accounting for 30 TDs. He's a true dual threat spread QB who will option, run draws out of empty sets, and use his feet to buy time for a play downfield. Making big plays, however, is the main handicap of last year's Wyoming offense. While Smith did an amazing job of protecting the football as a freshman (only 2.4% of passes intercepted), the Cowboys averaged only 6.3 yards per pass attempt and 10.3 yards per completion.

The Cowboy passing offense constitutes the bulk of their play calls, but it's the sneaky effectiveness of their running game with Smith (Wyoming overall: 4.9 yards per attempt) and risk aversion (low turnovers, only 12 sacks surrendered all year) that allowed them to put points on the board and go to a bowl game.

What We Can Learn on Defense

- Wyoming will make us identify and adjust to several looks. Empty sets, unbalanced lines, bunch formations. That's good prep in general, but it's particularly useful for our inexperienced LBs and Adrian Phillips.

- Wyoming's offense will attack us in the short passing game with screens, shovels, three step drops, timing routes. With a running game entirely out of spread concepts. We'll see this game plan all year long, as we did last season. Can we punish risk-averse game planning with quick pressure and aggressive breaks? Or are we content to keep the ball in front of us?

- Brett Smith is a dynamic dual threat QB and his WRs, if not elite, are quality (Chris McNeill is the best of the bunch). DB eye discipline and DL containment will be tested on every snap.

- The Cowboys break in two new OTs. Refer back to quick passing game. 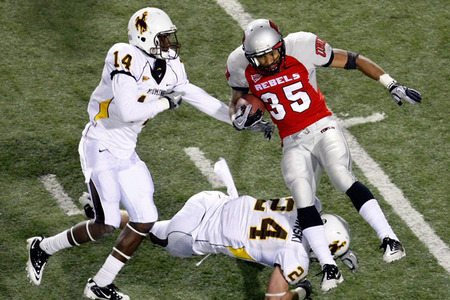 Christensen made an offseason change at DC after last year's unit surrendered 27.8 ppg, 432 yards, and 6.1 yards per play, as five Wyoming opponents totaled 500+ yards of offense. They struggled mightily against the run (5.1 yards per carry allowed, 232 yards per game). New DC Chris Tormey will bring more movement, more blitzes, and more exotica to the Cowboys, and I'm sure he'll be eager to test it on Texas.

Though it will be tempting to just run the damn ball and keep things simple, David Ash finishing the game with 10 pass attempts would be a tactical success and a strategic mistake. Ash needs confidence and reps in the passing game and while our first ten snaps shouldn't be in hurry-up out of an empty set, I do want to see 6-7 passing attempts per quarter from our offense, even if the RBs are going at 6 yards a pop.

We should also have a significant disparity in roster speed that should show up on special teams, particularly on punt returns.

What We Can Learn on Offense

- Wyoming will be blitz and stunt heavy, particularly with their safeties, they'll roll up extra defenders late, and our offense must punish overplay, protect, make good OL adjustments, and still get positive yards even when they guess right.

- The questions for our offense are more elemental. How do we look overall? How well do we pass protect? Run our base plays? What's Ash's decision making look like? Did our WRs really take a step forward? Do our constraint plays score?

- I'm curious about role players like Greg Daniels, Ryan Roberson, John Harris - how do they help us this year? Wildcat triggerman? Third down back?

- DTs Mike Purcell and Kurt Taufa'asu are being called the best DT combo in the Mountain West. I'll watch Espinosa against them with interest.

Texas should win convincingly, but I'll be mostly interested in 1). how we look overall on offense and 2). signs from our defense that we're ready to take the fight to risk-averse, spread game planning.