Share All sharing options for: National Nosedives: Which Teams Markedly Decline In 2012?

I've already discussed my three primed-for-decline Big 12 candidates: Oklahoma State, TCU, and Baylor. Each of these teams will drop at least two games from their 2011 win total, though I suspect that number will be more like three or four. What about the national nose dives? What other major programs go into reload mode? Or perhaps even begin their death knell?

I have three for you, each different. A true program decline, a readjustment, and a program reload. 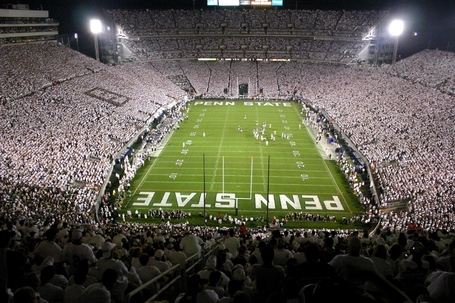 The death penalty is coming for Penn State football in 2012, irrespective of what the NCAA does. It's going to happen on the field. The Nittany Lions went 9-4 last year by performing well in a down Big 10 (6-2 conference record) playing efficient defense. Then they surrendered 600+ yards to Houston in their bowl game when the full weight of scandal met a team from below the Mason-Dixon line that could throw a forward pass (and Big 10 passing games promise to be weak again this year). The Penn St. offense was consistently tough to watch (19.3 ppg), with returning RB Silas Redd as the only bright spot. PSU returns only one OL starter and they will field arguably the least seasoned OL in major college football (17 combined starts). That's a troubling statistic for a team hoping to take some air out of the football, control possession, and win games 16-13. Bill O'Brien has a tough row to hoe.

Defensively, their secondary was gutted (0 returning staters) and their 4 returning starters in the front 7 range from good to adequate. An infusion of talent from a promising freshman class might ease the pain - as it did for Texas in 2011 - but their recruiting year disappointed. They'll be coordinated by veteran DC Ted Roof, recently fired from Auburn for a defensive philosophy that can best be described as Hey, Do You Remember The 80s?

Those are the football reasons for Penn State's decline. Any team breaking in a new OL and DBs gives me pause, but that doesn't address the psychic weight of what the Sandusky-Paterno scandal means to this program. And I'm someone who typically finds emotion-based analysis soft and overdone. But this matters. This scandal is not something to rally around in a The World Doesn't Believe In Us, And We'll Show 'Em sense - though PSU will try - like a team on probation (USC, Ohio State this year, A&M in the 90s), or the despised, but wildly charismatic outlaw programs embodied by The U or Switzer's OU. This is a different animal altogether.

Right now, Penn State - certainly through not fault of the players or current staff - represents the pure embodiment of institutional evil. And the hate and toxicity for what they "represent" will be palpable. It won't be the hate you can feed off of to inspire team unity.

Without putting too fine a point on it: t's not much fun to play for the school that covered up child rape for decades, while simultaneously lecturing everyone on their Goodness. Fans hate a finger-wagging hypocrite most of all and Penn State's arrival in town will inspire passion in even the Big 10's most docile fans. Am I the only anarchist who wishes they had a road game in Columbus this year?

Penn State will lose to either Virginia or Navy in non-conference and will go 3-5 in league play. They're looking at a .500 season, with a legitimate possibility for a spectacular implosion in the 4-8 range if the burden of being Penn State breaks them. 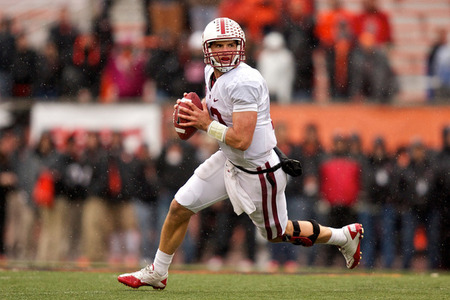 The Cardinal were 11-2 last year (3-2 against the Top 25), and they'll take a substantial step back, despite preseason polls that have them as high as #12. Yes, Mark Schlabach is actually paid money to write his opinion on college football. Though Andrew Luck is gone, Jim Harbaugh and David Shaw knew how to recruit and develop players, and the Pac 12's talent level outside of Oregon and USC is fairly depleted right now. So Stanford isn't going back to its dark days. But some realities are inescapable: the Cardinal are replacing a once-in-a-lifetime college QB who constantly threw receivers open, shrugged off free blitzers in the pocket, and completed more than 70% of his throws. Real throws; the kind that 95% of college football teams can't execute.

Brett Nottingham isn't there yet.

Like Penn St - and this is a recurring theme in my analysis - when teams lose substantial quality or numbers from the offensive line and defensive backfield, I'm leery. Stanford loses two elite OL in OT David Martin (2nd round NFL draft) and OG David Decastro (1st rounder, the best pure OL in college football last year). They also replace three of four starters in their secondary. And I'm always concerned about their ability to find speed and athletes there.

The schedule isn't kind and I like them to lose to USC, @ Washington, @ Notre Dame, and @ Oregon. Losses at Cal or UCLA aren't inconceivable either. Let's call it 8-5, post-bowl. Still heady stuff for Palo Alto, but let's tap the brakes on the Palo Alto Pacific Dynasty Talk. 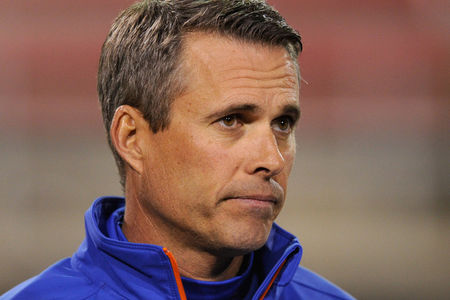 Boise loses EVERYONE. Think of a Bronco player you were familiar with. Ready?

We can do this all day.

And I don't want to read DJ Harper in the comments. You didn't think of him. Liar.

But the Broncos have built a terrific program that can roll through most of their patsy schedule on auto-pilot. Though they will almost certainly lose more games, their primary decline will be qualitative. Is that chicken shit of me to disclaim when I've clearly defined a clear W/L decline for my other five candidates?

Actually, here's why it's not: 12-1 in 2011 may only "decline" to 11-2 or 10-3 in 2012, but the quality of their product will be markedly different as revealed in overall competitiveness, margin of victory, statistics, and even in their bowl game, should they face a real opponent. It's about schedule. If the teams in my preseason Top 15 had Boise's schedule, they'd be favored for a 12-0 regular season. So qualitative decline means something when opponent strength disallows major quantitative decline.

That's fancy talk for: they can still win double digit games, and not be all that good.

The Broncos return only 7 starters. Five of them are on the OL and in the secondary, so that is a positive. But that Includes replacing nine defenders from a 2010/2011 core that gave them their best defenses in school history (and provided a surprising number of NFL draft picks). This fact, more than an anticipated decline on offense - which I'm convinced runs on a minimum 35 points per game average auto-setting, fueled by football nerds and gym rats - will be responsible for their decline. Boise State became a true player when they started playing defense - defenses that could stand up to the Georgias and Oregons while consistently humiliating their mid-major foes. Last year's DL was a pack of studs that could excel in any league and they'd been starting forever. If they can reload there without missing a beat - and they won't - I'll be in awe.

Boise State opens at Michigan State (followed immediately by a bye week, so they can do nothing but rep MSU all summer) and though it would be very Sparty for MSU to crap their bed enthusiastically (and you really have to admire Boise's clever scheduling of big-time-ish programs known for sucking early and/or wilting on the national stage: Oregon, Virginia Tech, Georgia, Michigan State - Petersen, you magnificent bastard!), the MSU defense shouldn't let that happen. The toughest games on the rest of their schedule consist of BYU, @ Southern Miss, @ Hawaii, and @ Nevada. Not exactly murderer's row, but what's a mid-major gonna do?

Longer term, Boise State will be just fine, but in 2012, they're just not going to be that good.